Microsoft have released a critical update for the downloadable version of Office Professional Plus 2013 Preview.  This update addresses a potential data loss issue in Outlook related to the unintentional deletion of mail, contacts andcalendar items from the Exchange Server.  If you downloaded and installed Office Professional Plus from Connect and are using Outlook, we strongly recommend that you install the update.  Updates can be found at the following locations:

For additional details on the update and issue identified with Outlook, please visit our Knowledge Base article:
http://support.microsoft.com/kb/2737132
NOTE: If you are using Outlook as part of Office365, no action needs to be taken.


Andre
Posted by Andre Venter at 11:00 No comments:

Lets have a look at some of the changes : (Details will be discussed later)

This allows a SharePoint Farm and SharePoint Infrastructure to be shared by different BU's or Clients. Typically it could be in a hosted environment where you need to give Multiple client the ability to manage their own environments. For more info Look Here

In Project Server 2010 there are 4 Databases:
One of the most significant changes to the actual architecture, is the consolidation of those 4 Databases into a Single Database. So no more 4.... Only one DB known as the Project Services Database. The 4 DB names are now "Tables and Views" of which only the Reporting table have direct accessing supported. So in that sense, nothing have changed. Read more Here.

This has been released inline with Microsoft Office 365. This is an Online-Hosted solution, which is Hosted in a Microsoft Data Center. This enables an organisation to Adopt quickly. This also have a "Pay-as-you-Go" Model.
In my opinion this is a relatively good offering for a Small organisation. (At a later stage i will discuss the why i think so)

Users can be added and changed when needed. Some of the benefits include, but are not limited to : 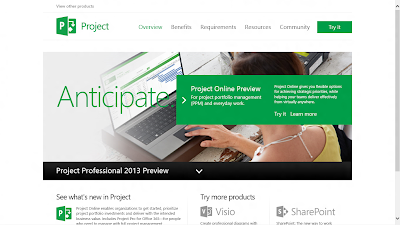 A new addition in Project Server 2013  is support for mobile access to your project Information. A web-based mobile site is now included, which enables team members and project managers to view project status  on a mobile device. You can access and edit relevant project documents and do lightweight editing of project plans from your Windows Phone 7.5 (using the Internet Explorer 9 browser), Apple iPhone, or Android device. For more Information read Here

No more costly licences to build a workflow. This might also have an impact on 3rd Party Workflow Engines like Nintex or K2. Now clients will need those 3rd Party Products only when they require more complex and advanced workflow's, as opposed to now, when just about any workflow requires a 3rd Party application. Read here for more information

My Tasks: All tasks in one location

The My Tasks feature allows users to see an aggregation of their SharePoint, Project Server, and Outlook/Exchange tasks in a single location — the My Tasks page in a user's personal site. Instead of navigating to different lists, sites, and site collections to view and edit both SharePoint Server and Project Server tasks, users simply have to go to their My Tasks page to see a single collection of all the things they need to do.

This is done using a new Service called "Work Management Service" that combines all of the users tasks in the My Tasks in a Users site. For more info on this click here

In Central Administration in SharePoint Server 2013, you can find the Manage Project Server Settings page in the General Application Settings section. For further reading click here

This is a list of some of the changes (There are many more) that i found worthy to mention for now. Note that some of these items might change due to this being based on the Preview Software and not the RTM software, however this is highly unlikely.

So it's almost here!! The Technical Preview is ready for download Here. This is just a quick post on Project 2013, to give everyone and idea of whats coming. In later posts i will go into a bit more detail on some of the new or changed functionality 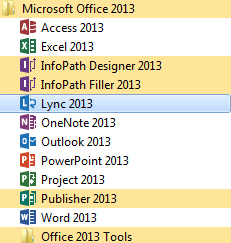 Now in my honest opinion it looks nice, but it no longer the "Standard" as we got used to. But i am sure most of us are open for change, right ?


So i went and opened Project 2013 preview and i got the the "Recent" Page. This page will list all you recent items, as well as templates. From here you can also search online for other templates.

A simple touch of the "Esc" button, opens a blank schedule for you to start with. This has not changed an awful lot.... Except that it is very very "White", not only is Project 2013 very "White" but the other Office 2013 packages too.

The Ribbon looks the same have more or less the same items on. There is one major Improvement that I would like to highlight in this post. Microsoft have Upgraded the "Local Reports" quite a lot. The good 'ol Visual reports are still there, but they have added a few new reports. 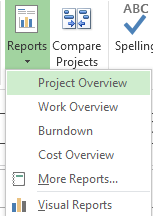 Lets have a look at one of those reports, the Project Overview Report: 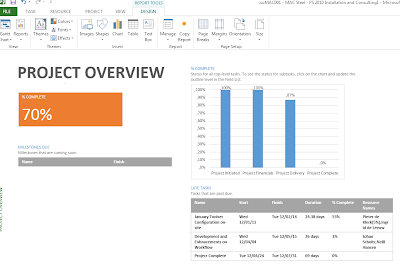 Now most of these reports can also be edited to some extent. I will look at that in a later topic.

Saving a document works the same as before. File - Save or Save As. Have one or two more options though. If you singed up for SkyDrive you can save the document directly to your SkyDrive making it more accessible from various locations. What you dont see there is a Project Server option - I have not configured one as yet.

In time i will do some more blog posts on Project 2013 and Project Server 2013.If there are any specifics you would like to know, please comment here, maybe, just maybe i might be able to help you :-)

Posted by Andre Venter at 16:17 No comments:

MSP Issue when trying to connect to Server (ActiveCacheUnsupportedProjectVersion)

When trying to connect to the Project Server from Project Professional 2010 a user encounters and error: 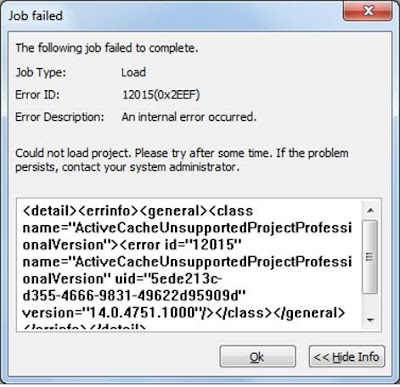 The key to this issue is the 4th Line in my Screenshot. "ActiveCacheUnsupportedProjectVersion" This simply means that the users Project Professional is not on the Same Version (Be it Service Pack or Cumulative Update) as required by the server.


Administrators can "Version Control" Project Pro clients to must  be a minimum version before they are allowed to connect to the server. If they do not have the correct version, this error is displayed above.

It normally confuses users as it seems like a serious issue due to the error description in XML code. I'm sure at some Point Microsoft could perhaps update this "Function"   to look less like an error.