OK, it has been released. Only in the server roll up package though


See below from Brian Smith:


It would seem like the "Duplicate" values issue might be caused by either the Oct 2011or Dec 2011 CU, as there has been multiple reports of this issue and it seem to have been confirmed as a bug, the bad thing is there is currently no ETA on the fix. For more information look here.

Recently we have had an issue with our Project Center displaying a "Unknown" error. Not very helpful is it ?

I had a look in the ULS Logs and found this :

I have removed a large part of the error to save some space here, but the answer is in the error above!

So when looking at the error i see a "FilterDal+FilterException: Error during filter query execution". So what i did is navigate to to Server Settings > Manage Views. I then checked which Project Center views have Filters applied by default on the view (Regardless if it is/was the applied view)I then removed the filter from the view(s).

After i removed the views and saved them and re-checked if i could go to Project Center, and suddenly the by now very Infamous "Unknown Error" is no longer there. If i then manually apply the filter to view it works ! I know its no ideal, but it's a work around so that users can browse the Project Center.

At this point in time i cannot say for certain what have caused the issues. But i can only speculate. We have had a corruption of a schedule due to issues with Outline Codes. It would seem (Once again i am speculating) that a "Known" issue is causing the corruption of the custom fields:(http://social.technet.microsoft.com/Forums/nl-BE/projectserver2010general/thread/236336b7-bbcb-4db3-9483-e4dd940aaff5 )

Have a look at the Image below, most of the fields are look-up codes, and note how they are duplicated even they  have not been created as "Multiple Selection" fields, like project Phase, Project Status etc,so somehow those fields got corrupted: 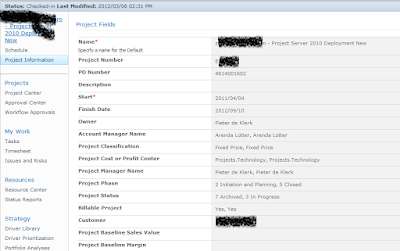 In a nutshell i Think these items might be related. The schedule actually opens and publishes but the issue seem to be on the Web whilst displaying the PDP, and then ultimately corrupting the filter in the Project Center Views. Even deleting the Project did not fix it though, but by know we know, once its broken something it's very difficult figuring out how to fix something that already broken, as apposed to prevent it from happening again.

I will test by deleting the Views and re-creating them again. If i find out more i will update this post. I hope someone might find some value in this.

Systems Governance said...
This comment has been removed by a blog administrator.
14 March 2012 at 03:43

It would seem that it has been confirmed as a bug,with no ETA on the Hotfix

Just installed the April 2012 CU and ran the cleanup scripts and it now seems that it has been resolved. Will test a while and revert with Feedback.